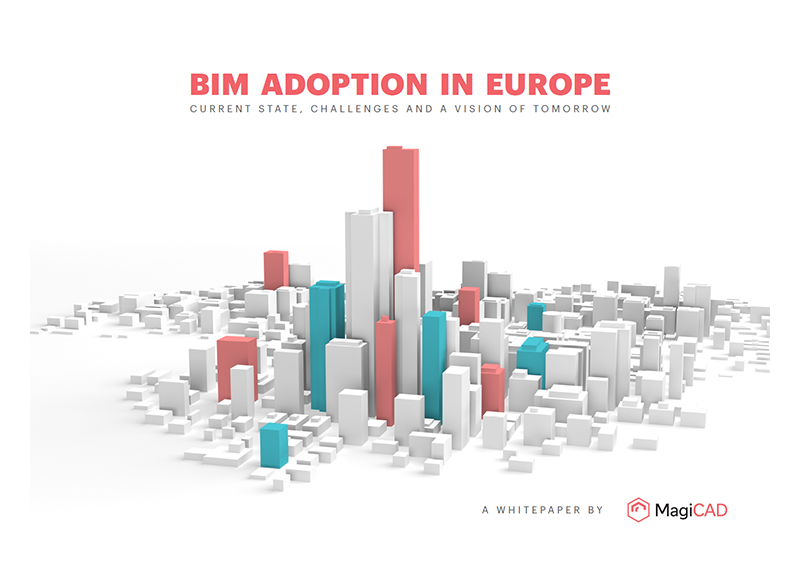 When examining the history of BIM adoption we see that it starts with a vision for digitalisation supported by technological innovations and development. This was then followed by industry initiatives on standardisation and country specific BIM mandates.

The innovation and development of BIM technologies has been led by key software providers which followed different strategies. Some relied on their traditional main CAD platforms and built BIM solutions around them (Bentley, Nemetschek). Others developed entirely new modelling engines (Autodesk). In all cases, a complex blend of CAD and AEC technologies established the foundation of 3d parametric modelling. [1] As our diagram suggests, the development of BIM technologies took of in the early 1990s. When it was integrated with an Information Management system of choice, during the late 1990s, it becomes the final BIM solution. BIM technologies have had continuous incremental improvements during the years and have seen a jump in innovation with the recent introduction of highly collaborative tools and workflows.

Country initiatives for BIM started in the early 2000s. Finland, Sweden and Norway were amongst the earliest adopters of BIM technologies setting the public standards and requirements. In fact, Finland started working on implementing BIM technologies as early as 2002, and by 2007, the Confederation of Finnish Construction Industries had mandated that all design software packages need to pass Industry Foundation Class (IFC) Certification.[2]

Austria and Norway were the first countries to establish open BIM standards and an open BIM mandate, requiring level 3 BIM on public projects. Other Nordic countries, the UK, France and Russia also have established level 2 BIM mandates in place and have different schedules for moving to level 3 BIM.

Germany has long taken a conservative approach towards new digital construction technologies. However, the turning point of BIM adoption in Germany was in 2013 when Germany’s Federal Ministry of Transport and Digital Infrastructure founded a Reform Commission for building management aiming to develop concepts and politics in this field. The country is currently nearing the end of the piloting phase and first applications may even be seen during 2020.

Reflecting the current surge of interest in BIM, many other countries have in recent years introduced BIM programs with a view towards an eventual BIM mandate. Italy already has a mandate for public projects exceeding 100 million EUR and full implementation is expected in 2022 for all public procurement projects. Germany, Spain and the Czech Republic have active BIM programs with varying schedules, but all of them are expected to establish a BIM mandate within a few years’ time.

Find out more about the BIM Adoption in Europe by downloading our free White Paper.