Bringing a Gothenburg landmark into the 21st century 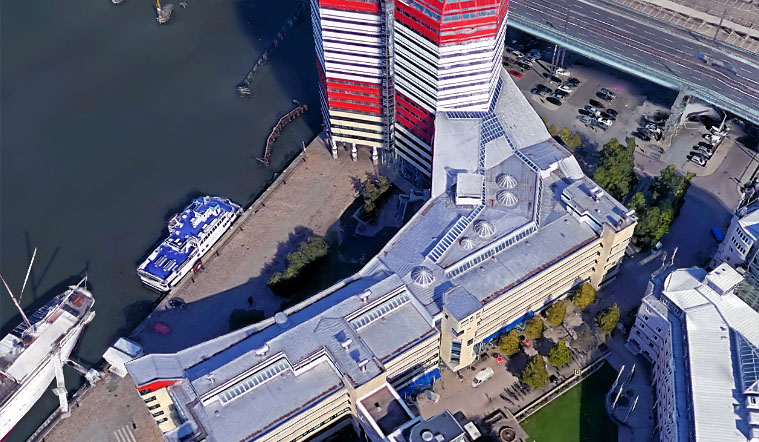 Älvporten, which is a wing of the landmark Läppstiftet building in Gothenburg, has undergone a complete renovation in which the focus has been on flexibility and energy efficiency. The project was among the nominees in 2018 for the Swedish building industry award Årets Bygge.

Läppstiftet (‘The Lipstick’) in Gothenburg was designed by Ralph Erskine and is one of Sweden’s most recognizable buildings from the 1980s. Officially named Lilla Bommen, the building received its nickname due to its characteristic appearance; high, white in the middle and red on top with beveled top stories, reminiscent of the shape of a lipstick.

Renovated wing with over 10,000 m2 of office space

Extending from the more famous high-rising part of the building is a wing that has been completely renovated and named Älvporten. Over 10,000 m2 of office space were turned into flexible and energy-efficient offices in a partnership project where all participants were involved in decisions and worked in cooperation. The engineering company Andersson & Hultmark AB designed the ventilation and piping system for Älvporten.

“It’s a very special building, with a lot of angles and large glass-roofed spaces. You have to put some extra time into each decision, for example, you cannot simply fit all HVAC elements into the ceiling and keep the installation invisible. It’s been a fun challenge to create good-looking solutions without altering the feeling of the building”, says Niklas Heidenborn, HVAC engineer at Andersson & Hultmark AB.

The layout of the building has changed and the keyword is now flexibility. Every third meter a section of the window ledges has been prepared for quick installation of new walls as needed. All the necessary technical elements are ready for use inside these seams.

There was also a continuous awareness of environmental considerations during the project. The building had previously been LEED Gold certified and its energy performance has been further improved with intelligent additions, such as window ledge air devices that operate based on occupancy.

“The ventilation system adapts to the needs of each room. It’s a smart system that keeps losses down as much as possible. An office should not be running at full capacity when it is empty. Now, the system is active during the daytime when everyone is on site,” Niklas says.

Bringing Läppstiftet into the 21st century

The project was among the nominees for the Swedish building industry award Årets Bygge (‘Building of the Year’) in 2018.

“The vision for the project was to turn this special landmark into an energy efficient, modern 21st century building”, Niklas says.

Andersson & Hultmark AB used MagiCAD for Revit on the project.

“MagiCAD facilitated the process a lot, especially with such a complicated building with angles, glass-roofed spaces and landings. We could examine the whole building in MagiCAD. All functions in the software support each other and we could manage the entire project in a single file, instead of using multiple files. MagiCAD provides a good overview throughout, which means that it is difficult to make mistakes. The entire project has been really great,” Niklas concludes.